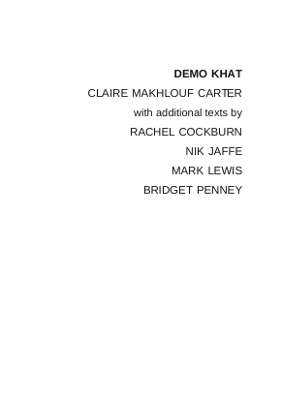 Claire Makhlouf Carter develops performance events and interventions, setting up an interruptive form which she terms ‘organised gate-crashing’ by juxtaposing a range of knowledge bases to explore relations critically. She often employs temporary workers, drawing out the internalised and embodied complexities of social and institutional relations in order to simulate a critical institution. 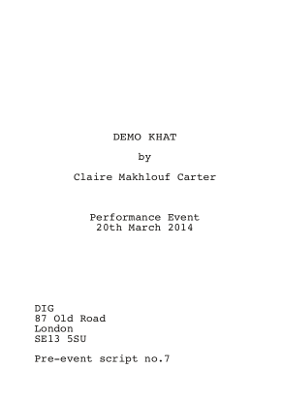 DEMO KHAT, a performance script by Claire Makhlouf Carter, focuses on the practice of chewing khat to highlight the social body as a contested political site. She draws out issues such as immigration, perceptions of belonging, labour relations and acts of exclusion. Carter’s script was performed for the third time as part of an event at Dig, an alternative, unofficial arts venue in London, on 20th March 2014. Additional texts by Rachel Cockburn, Nik Jaffe, Mark Lewis and Bridget Penney explore aspects of creating artworks for that particular evening at Dig and the experience of being a visitor to the event.

‘Khat is grown and consumed in parts of north east Africa and the Middle East where khat has a long history dating back thousands of years as a social custom which stimulates conversation. Between 50 and 60 tonnes a week are imported into the UK to meet demand among predominantly Ethiopian, Kenyan, Somali, Yemeni and other immigrant communities’. Khat was traded into the UK as a vegetable until 1 February 1998, when HMRC reclassified khat as a ‘stimulant drug’ and it became standard-rated for VAT.

On 24th June 2014 khat was classified as a Class C drug in the UK and it became illegal to possess, produce and trade in it. A Home Office leaflet stated that this was to ‘help protect local communities from the potential health and social harms associated with khat and to ensure that the UK does not become a hub for international khat smuggling’. Yet in banning khat the government completely disregarded the recommendations of the Advisory Council on the Misuse of Drugs and their own Home Affairs Committee. An afterword by Carter and Penney considers some of the complexities surrounding the introduction of the ban and tries to form an impression of the situation one year on. A full list of references to material cited in the afterword can be found here. 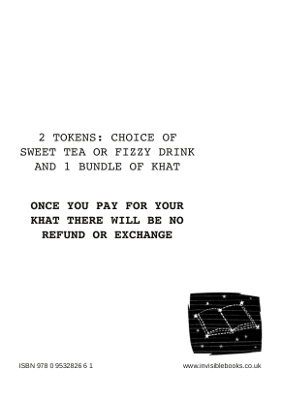 Claire Makhlouf Carter’s DEMO SAFE, Performance event and carry over, is part of the group exhibition Safe: are you allergic to the twenty-first century? at HOME, Manchester from 14/11/2015 to 03/01/2016. DEMO SAFE considers placebo response expectancy theory in relation to social policies triggering questions of belonging, trust and contamination. In the course of the event, copies of DEMO KHAT are handed out to participants. The book will be made available as a free PDF once the exhibition has finished.