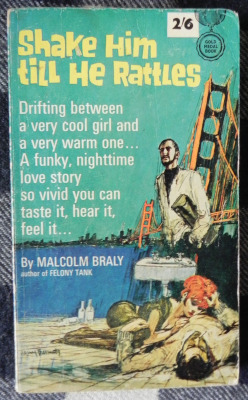 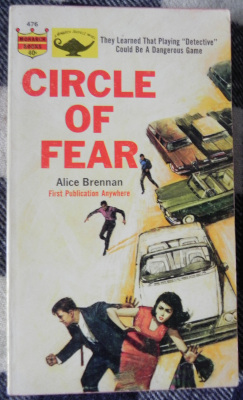 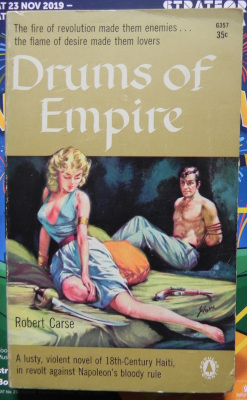 Nik Cohn | Arfur | Panther | 1973 | 0586035729 First paperback printing. Predominantly white cover is rather worn, with very light foxing, & a darker mark at the edge of the spine. Paper is tanned, & the reverse of the cover & endpapers are foxed. There are a couple of tiny fingernail nicks to the outer edge of the book. | £50.00

Norman Collins | Penang Appointment | Penguin | 1939 | First Penguin edition in unclipped jacket. The crease of the front flap of the jacket is rather worn & partly split. Otherwise this is a bright attractive copy. | £100.00

Robin Cook aka Derek Raymond | Bombe Surprise | Pan | 1966 | Pan X513 – light wear to cover & edge, the outer edge of p.47 is slightly miscut & crinkled from the book’s original production process, but this does not affect the readability of the text | £25.00

Hubert Creekmore | Cotton Country | Corgi | 1953 | cover still looks great, spine creased & chipped, a couple of pressure marks on back cover, noticeable projection about halfway along the outer edge where the book has been opened hard at some time, although the binding still seems firm | £7.50

Blair Edwards | The Impatient Miss Blacket | Caldo | plain card cover with wrap, glued down at spine: cover & wrap are creased, with damage to the wrap at the bottom of the front cover, no problems with the text block, apart from some blotchy foxing to the ffep, outer edge is dustmarked & foxed (Stock ref 3082) | £20.00

Richard Fariña | Been Down So Long It Looks Like Up to Me | New English Library | 1968 | A handsome copy with lightly faded, lightly creased spine, paper tanned with age. | £30.00

Joan Henry | Yield to the Night | Panther | 1965 | Paperback with striking cover, which still looks impressive despite some general wear, most evident at the edges of the spine. The spine is creased, & there is a short split at the top of the join of the spine/front cover. There is a small portion of paper missing from the outer margin of p.19, which does not intrude upon the printed area of the page – I can’t tell whether this is a production fault or fingernail damage. | £35.00

John Clellon Holmes | The Horn | Ace | 1961 | A handsome copy with some wear to edges of cover. A remainder stripe & a couple of splash marks, which do not extend onto the main area of the pages, can be seen on the top edge of the page block | £20.00

Hank Janson | The Devil and the Deep | Compact | 1965 | small rough patch on cover where a label has been removed, white background of cover foxed, spine moderately creased, front cover set a little forward | £10.00

Jack Kerouac, Henry Miller [pref] | The Subterraneans | Avon | 1959 | Avon T-302. Cover art looks fabulous, but somebody has used the book as a writing surface at some time, & the imprint of letters can be seen on the cover if it is tilted to the light. Book is rather slant, with the front cover set forward, first & last pages are rather foxed. Still an impressive looking copy. | £15.00

Jack Kerouac | The Subterraneans | Panther | 1962 | Film tie-in copy with wear to edges of cover, light crease on title page, a tiny fingernail nick to the outer edge of p.69, paper tanned with age. | £40.00

Walter Tevis; David Fickling | The Man who Fell to Earth | Oxford | 1979 | Edition designed for English learners, with modified text. Fabulous cover art. Monochrome film stills on reverse of front & back covers. Front cover is scuffed at edge of spine; there is an unsightly label mark on the back cover. | £30.00

Edgar Wallace | The Daffodil Mystery | Ward, Lock | n.d. | undated large format paperback with Bovril advert on back cover; cover worn, rusty mark around one of the staples with which the pageblock is bound | £10.00