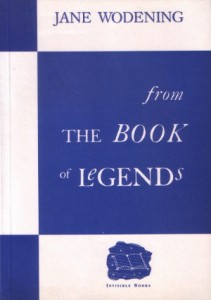 Like Aubrey’s Brief Lives set down by Gertrude Stein, these legends of Maya Deren, Joseph Cornell and Charles Olson have the vivid force of anecdote, ocuppying the space between what is remembered and what actually happened.

‘”Tell me about them”, like they say, is an invitation to make in some way substantial the people who aren’t there and may well never be there again at all…No better stories will be told than these, because no one else as she was there to tell them.’ from the preface by Robert Creeley

‘Jane Wodening’s reconstruction of well-known characters is magic realism of the most delightful kind.’ Ed Dorn

‘Only wished there was more of it.’ David Miller

‘Reading through his poems felt to me like setting out on a walk in the mountains. I was always turning unexpected bends and the objective in sight was always appearing, the same, but slightly different, from a different angle.’ from ‘Note through a Lens’

‘The writing reveals a complex, self-reflexive dimension in which the text addresses, or better, enacts, what it is for the poet to recognise – in the life specific to the poetic style – the truths of experience….There is a distinction here that English literary culture can ill-afford to ignore.’ Michael Grant, PN Review 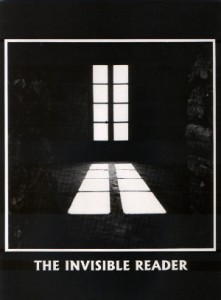 An anthology of poetry, prose, graphics and great stuff in between. We went on to work with many of the contributors on other projects. 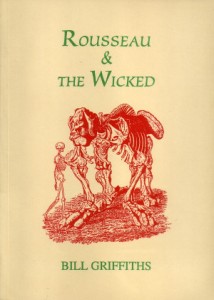 ‘There cannot be any peace between J-J Rousseau and the wicked.’ J-J Rousseau, from a letter to Elisabeth-Sophie-Francoise Lalive de Bellegarde, comtesse d’Houdetot, 25 March 1758.

‘In the winter of 1766, Rousseau stayed at Wootton Hall in England. Here he did not so much vegetate, as, seemingly, seek active equality with plants, his new obsession. English admirers would contrive to encounter him by chance on his rambles, leading him to conjecture some massive conspiracy against his life.

To some, Rousseau may appear bizarre, disroyal and negligiible; if not, you have a good chance of enjoying this book of open ideas and strange identities.’ BG’s copy for back cover

An edited transcript of an interview we conducted with Bill Griffiths in September 1993 can be viewed in our archive.

The cover art is by David Dellafiora. David’s Table of Enlightenment, sections of which feature in the banner headings on our website, was also commissioned for this project. 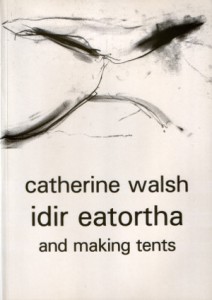 ‘In Idir Eatortha Walsh explores similar thematic terrain [to that in Making Tents], but with a more refined sense of sound, both as a way of experiencing an environment and as a medium for poetry. Some of the strongest sections of the piece consist of a kind of aural landscape, in which Walsh captures with remarkable accuracy the disconnectedness of the urban soundscape. Snippets of half-heard street conversations and sudden, unidentifiable background noises combine to suggest, but not to reveal, a possible linking narrative….With this poetry of fragmented experience, disjointedness and not-belonging, we find ourselves never quite sure of where we stand, always on the verge of making ourselves at home in poems that won’t quite allow themelves to be domesticated.’ Robert Archambeau Notre Dame Review 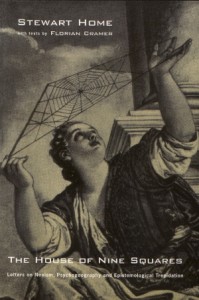 ‘What follows is structured around a sequence of letters I exchanged with Florian Cramer. We are both interested in Neoism but the rhetorical systems we have fabricated around this ‘movement’ are quite distinct. Naturally, this leads to a considerable amount of disagreement, with both of us modifying and sharpening our positions during the course of diverse argumentation. It should go without saying that such antagonism is necessary if the discourse that has developed around Neoism is to be kept from degeneration into a hideous caricature of itself.’ from the Introduction by Stewart Home.

‘A chief concern of The House of Nine Squares is to rewrite its readers into players. This is to be gradually achieved. First, The House of Nine Squares denies there is a game. Second, it hides the rules from those involved. Third, it gives them all penalties and no wins. Fourth, it removes all goals, enforces their playing, inhibits their enjoying. Fifth, it makes them look like players, but forbids them playing. To make a reader remain a piece in the game, it permits him to associate only with pieces and denies the existence of players.’ from the Afterword by Florian Cramer

The images on the cover were sourced by Florian Cramer. They are taken from Paolo Veronese’s fresco Dialettica (circa 1580). 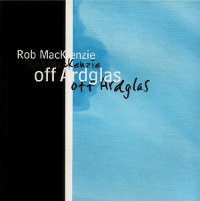 ‘Rob MacKenzie is an analytical artist. His vibrant language expresses the impact of love and landscape on his alert senses. This writer has an appetite and gulps for lingering vapours; reaches for the scales of a saithe. His knack of tuning-in to the rhythm of groundswell is awesome:

nothing has the time of Murdo’s loom

He probes regrets and opportunities; departures; the rural sprays of Lewis; the urban clashes of Cambridge, Edinburgh, Stornoway. But he is fundamentally positive in his restless linguistic energy. At times that verve seems out of control but better that – surely – than tame verse. And when his analysis reacts totally with language, the resultant spray of words could only be Rob MacKenzie’s. I’m fortunate enough to know some of the headlands, geos and skerries whhich are waypoints here – even a few of the box players; celtic crooners; punk rockers who people this book. All the sketches seeem, to me, accurate.

But all the sensory excitements are filtered through the very individual consciousness of one unique poet. Listen out for this guy.’ Ian Stephen 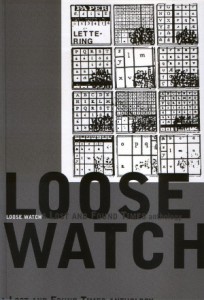 Loose Watch is a selection of texts and graphics from issues 1-39 of Lost and Found Times. It features the work of 170 contributors from North and South America, Europe and the former Soviet Union. The magazine was founded in 1975 by John M. Bennett and Douglas C. Landies; the first issue was ‘a sheet of fake lost and found notices to be slipped under the windshield wipers of cars in the parkinglot of Graceland Shopping Center’. After Landies’ death in 1978 Bennett continued to edit and publish the magazine until 2005, the last issue being no. 54. Bennett writes in his introduction ‘I enjoyed reading and publishing unusual work, work that at the time no one else seemed to be publishing’. Lost and Found Times has created its own vital culture which its readers and contributors continue to both add to and draw from. Many of the latter have had a long relationship with the magazine and, through it, with each other, generating a high proportion of collaborative works. From its origins in mail art to its more recent participation at the edges of language (and what’s coming to be called post-language) poetry, Lost and Found Times provides a model of how marginalised cultural workers can create productive areas of engagement within a network of activity.

The cover features an image by Serse Luigetti which originally appeared in Lost and Found Times 30. 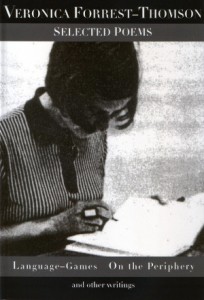 edited by Anthony Barnett with a postscript by Alison Mark.

Veronica Forrest-Thomson was born in 1947 and grew up in Glasgow. She studied at the Universities of Liverpool and Cambridge and taught at the Universities of Leicester and Birmingham. She worked both as a poet and a critical theorist. From 1971 to 1974 she was married to the writer and theorist Jonathan Culler. She died in 1975.

Four books and pamphlets of poetry – Identi-kit, Twelve Academic Questions, Language-Games and Cordelia: or, ‘A Poem should not Mean, but Be’ were published during her lifetime; a fifth, On the Periphery, was issued posthumously. These, together with a great many previously unpublished and uncollected poems, and her translations of poetry and critical theory from the French ‘Poetry Such As: An Introduction to the Poetry of Tel Quel’, were gathered in Collected Poems and Translations published by Allardyce, Barnett in 1990. Her critical study Poetic Artifice: A Theory of Twentieth-Century Poetry was published in 1978.

Selected Poems comprises the whole of two book collections: Language-Games and On the Periphery. Also included are a group of poems from the late 1960s and ‘Further Poems’, some, though certainly not all, of which might well have been intended as additions to On the Periphery.A few early poems located since 1990, and a list of corrections to poems in Collected Poems and Translations not reprinted here, are included as appendices. 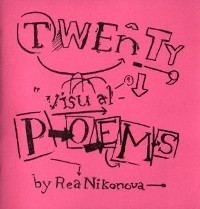 We first came across Rea Nikonova’s work in Lost and Found Times. Four pieces of her work were included in Loose Watch.

Invisible Books were invited to take part in the first Spike Island Book and Zine Fair in October 2011. After a long publishing hiatus, we thought we should produce something to mark the occasion. Rea kindly agreed to let us use her work and nearly fifty copies were given away at the event. In March 2012, the publication was among those featured in ‘Maintenant: A Celebration of Contemporary AvantGarde Poetry’ at the Rich Mix Art Centre, London. Around forty copies were distributed on that occasion.

The afterword, which gives a brief overview of Rea’s life and the wide range of her poetic practice, is reproduced in our archive.

Details of our new publication, Demo Khat, can be found here.