Paul Claudel; Henri de Lubac, S. J. [intr.] | I Believe in God: A Commentary on the Apostles’ Creed | Harvill | 1965 | Some loss to upper edge of jacket around the spine, closed tear at upper fold of spine/back cover; pale jacket rather worn & marked. Name of ffep. Some pencil marking. | £15.00

Padmasiri De Silva | An Introduction to Buddhist Psychology | 1979 | hardback in jacket, small pencil mark in the margin of one page (there may be others which I haven’t found, but certainly nothing conspicuous or distracting) | £25.00

C. Stephen Evans | The Historical Christ and the Jesus of Faith | Oxford | spine creased, general wear to cover & edge, pressure marks on back cover, no problem with text pages | £14.00 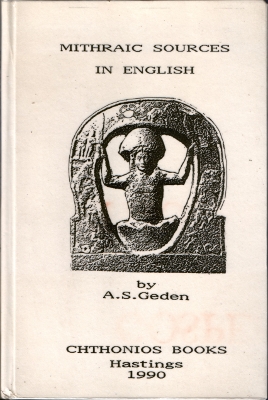 Rosemary Harris | A Wicked Pack of Cards | Walker | 1969 | inscribed by author on ffep, pale cover is worn & marked, with some loss to top edge, but still looks impressive | £12.50

Arthur Berriedale Keith | The Religion and Philosophy of the Veda and Upanishads – 2 volume set | Motilal Banarsidass | 1989 | Reprints, no jackets, cloth covers are slightly different tones, spines of both volumes and top edge of vol I are lightly sunned. There is a diagonal pressure mark at the lower inner corner of the front cover and opening pages of vol I – I think a binding fault rather than some later mishap – and a few small marks on the cover of vol II. ISBN of vol I is 812080645X, vol II 8120806468. A sturdy, serviceable set. | £30.00

Charles G. Leland, Mario & Dina Pazzaglini, Chas. S. Clifton, Robert Mathiesen, Robert E. Chartowich, Stewart Farrar [intr.] | Aradia or the Gospel of the Witches | Phoenix | 1998 | This is the 1998 expanded edition of Aradia, including both Leland’s original translation & a corrected translation by Mario Pazzaglini, along with additional material. There is minor wear to the cover & edge of the book, & the lower edge has picked up some marks. | £65.00

Caitlin Matthews | The Celtic Book of the Dead | Connections | 1999 | Hardback book with pictorial cover, minor wear to cover most evident at edge | £40.00

T.S. Maxwell | The Gods of Asia; Image, Text and Meaning. | Oxford | 1998 | 0195647335. Paperback. Reprint. Fair. Scarce. Cover is worn and discoloured, grubby on spine. Lamination is starting to peel at corners and along top edge of back cover. Fep very foxed. Most of text pages unaffected BUT there is a grubby mark in the lower margin of pl. 66 and the last plate is badly foxed. Text is clean and unmarked. Ready to post in UK. | £65.00

John Michell | New Light on the Ancient Mystery of Glastonbury | Gothic Image | 1990 | 9780906362143 No. 430 of a signed limited edition of 999 copies. Illustrated boards. Some wear to cover. Outer edge of back cover is sunned, as is the very outer edge of the front cover. First signs of foxing on outer edge of pageblock. Endpapers are lightly tanned, & there is a light rusty mark on the outer edge of the front endpaper. Still a handsome copy, but evidently secondhand. | £50.00

Lawrence Millman | Wolverine Creates the World | Capra | – | Cover & edge rather worn, one page corner folded over, pencil traces of some other bookdealer’s price on ffep | £15.00

M. M. Pattison Muir | The Story of Alchemy and the Beginnings of Chemistry | Newnes | 1902 | Attractive pocket edition with lightly marked cover, front cover set a little forward, faint traces of a bookplate having been removed from the front pastedown. | £50.00

Emiko Ohnuki-Tierney | The Monkey as Mirror: Symbolic Transformations in Japanese History and Ritual | 1987 | hardback in jacket – jacket is rather worn, with a few closed tears on the top edge, including a long one down the fold of the front flap, no problem with main body of book | £10.00

Penelope Shuttle & Peter Redgrove | The Wise Wound | Gollancz | 1979 | Third impression in unclipped dustjacket. There are traces of a circular price label on the lower right hand corner of the front cover, & an old secondhand price label on the front flap. Light wear to the edges of the cover, some foxing of the outer edge | £30.00

R. H. Stevenson [tr]. | Amiran-Darejaniani : a cycle of medieval Georgian tales traditionally acribed to Mose Khoneli. | Oxford, Clarendon Press | 1958 | Hardback in dustjacket. Reading copy only. This book has been kept in damp conditions at some time, leaving the jacket in tatty and stained condition, and the book cover discoloured, with a little transfer from the jacket. The book is also rather bowed, with blotchy foxing on the edge and endpapers. Apart from some wear to the outer edge, there is no problem with the text pages. | £20.00

Charles Williams | The Greater Trumps | Faber | 1954 | reprint in unclipped jacket – at first glance a very good copy, but there is a small mark on front of jacket, white back of jacket is marked, edge of pageblock is rather worn, a few pencil markings on blank rear endpaper | £20.00